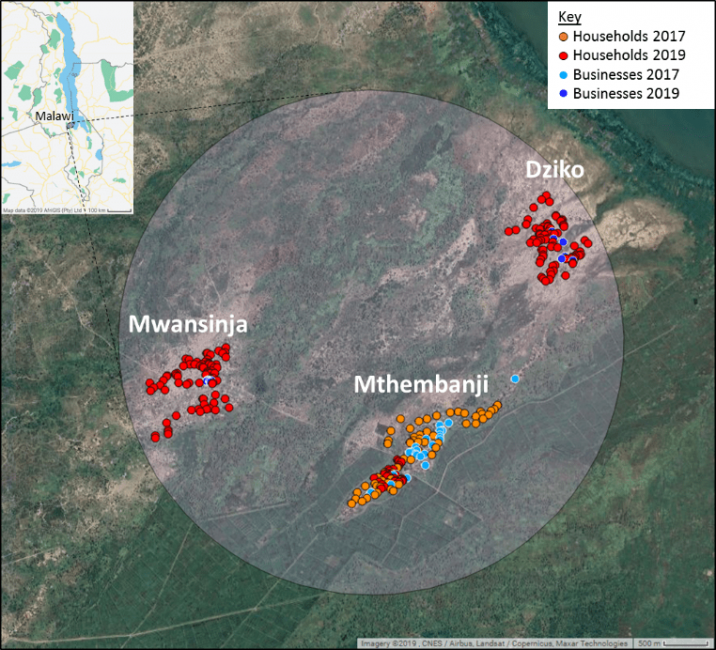 The EASE monitoring and evaluation strategy includes tracking the SDG7 impact in each community where a microgrid or energy hub is deployed. In addition, microgrid ‘customer journeys’ will be documented. To support these aims, a baseline survey was carried out for households and businesses in Mthembanji (Dedza district) in February 2019. The responses were combined with data from a similar exercise carried out in 2017, including two other satellite villages (Mwansinja and Dziko), resulting in a dataset of 281 households and 47 businesses. Analysis provided valuable baseline information including several key areas described below under the headings of: occupations and expenditures, electrical appliances and sources of energy, and cooking fuels and devices. Cross-analysis of the variables demonstrated some additional findings which are described in the final section.

Mthembanji and the surrounding villages were predominantly farming communities (89%) with many also selling primary goods such as crops and fish (62%).

Electrical appliances and sources of energy

With households relying so heavily on dry cell batteries, their electrical appliance and device ownership was very low; 36% had a mobile phone and just 29% had a radio.

Businesses’ energy sources were very different, 39% had solar home systems and 30% had pico-solar products – solar was the main source of lighting for 63% of businesses. The proportion of businesses using dry cell batteries was less than half that of households (30%). Five businesses owned generators.

Phone and radio ownership was double the level reported by households (phones and radio both 65%).

Similar proportions of households and businesses aspired to own a selection of electrical devices, of which fridges and TVs were the most popular. Households also wished to own radios, but when asked what they would use microgrid electricity for, lighting was the most popular choice, selected by over 5 out of 6 respondents.

All households cooked with biomass, with almost all households using firewood with a traditional three stone fire (92%), some using a basic clay firewood stove (chitetezo mbaula, 9%) and some using charcoal (12%).

The proportion of people without any education was significantly lower in younger adults, which appears to be due to increases in the proportion having completed the first and second halves of primary school.

Similarly, the smallest gender gap in education was in the youngest age group, while the gap increased through the higher age groups. Education above primary school level could not be analysed across age groups due to small sample sizes.